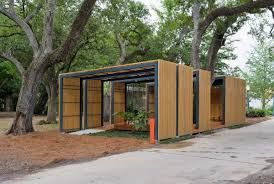 Dwell – Botanical Garden Pavilion When Hurricane Katrina hit New Orleans in 2005, architect and University of Kentucky lecturer Mike McKay felt the pull to go down to the Big Easy to help with a task that was anything but easy: rebuilding the devastated city. He moved to Louisiana for two years to lead the architecture school’s Knoa Studio, a program that tasked studios to develop designs for neighborhoods, restaurants, and the city transit system. McKay moved back to Kentucky in 2007 but his work there was far from finished. During the storm, many of the old cypress trees in City Park and its New Orleans Botanical Garden were uprooted and the gardens were decimated. McKay’s uncle, Paul Soniat, was the botanical gardens director at the time and called McKay. A local woman had donated money to build a structure for volunteers, who were the main source of maintenance for the park after the storm, and they needed a design. With very little money, very generous material donors, and a modular system that incorporated the supplies, McKay created the New Orleans Botanical Garden Duplantier Volunteer Pavilion.

How to make a giant peg board to organize your craft room, kitchen, garage and more.

doily lamp with a huge ball

This block is new to me. Log Cabinesque but good for shorter strips. Value placement here is random...might make a nice

DECORATING A MANTEL WITH A TV ABOVE

Ravelry:Abstract Crochet Cats pattern not to mention it would make a great baby

This is a very nice chicken coop, with great roam space. Is very realistic for most commen backyards.